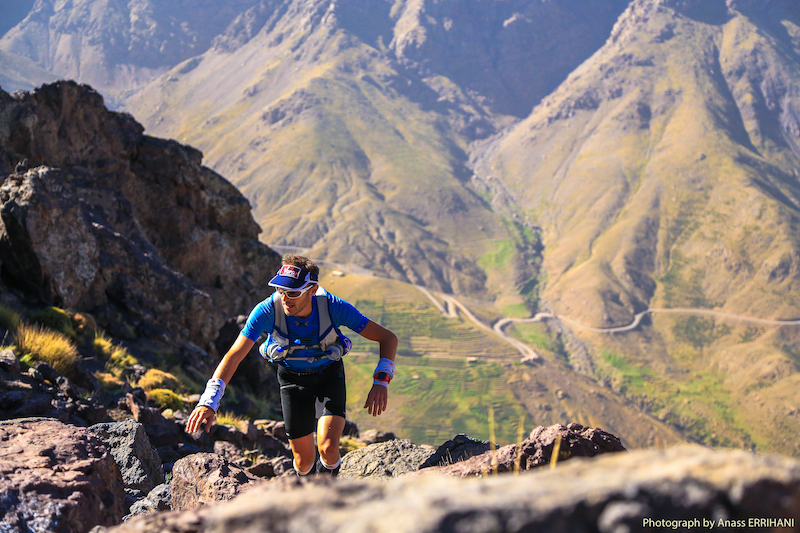 By the WTS coaches

Here you will find some practical advice for your participation at the UTAT. To put all the chances on your side, drink regularly and sufficiently, eat fast carbohydrates at regular intervals and pay close attention to your effort management, a blow of fatigue can hit you anywhere!

The Ultra trail Atlas Toubkal takes place in October in Morocco. The race characteristics are the length (105 km), an important positive gain (8000m) and its altitude (start at 2600m, highest point 3450m).

The maximum endurance capacity is reduced in altitude due to a phenomenon called hypoxia (decreased concentration of oxygen in the blood); Consequently, the runner should modify the intensity of his/her training, manage his/her effort, nutrition and hydration to limit as much as possible a possible negative impact on performance.

Why does the endurance capacity decrease in altitude ?

You often hear that oxygen (O2) diminish in altitude. This is only partly true. The percentage of O2 in the atmosphere is actually constant whatever the altitude (20,95 %). It is the partial pressure in O2 (PpO2) which decreases due to the reduction of the barometric pressure. At sea level this pressure is

The decrease in barometric pressure, and thus of the partial pressure in O2, leads, by a phenomenon of chain reactions, to a decrease in the O2 supply

The final consequence of the hypoxia is a decrease of the maximum oxygen consumption (VO2max), since it depends on cardiac output and arteriovenous difference in O2.

The estimation is that there is a 9% decrease of the VO2max with each 1000 meter of elevation gain. Several studies show that this phenomenon, called “hypoxic stress”, is seen on trained athletes starting at about 600 meters.

In a similar way, the maximum CF (cardiac frequency) is lower in an altitude above 2000 Meters. To limit hypoxia, the human body adapts physiologically as soon as the blood pressure drops below its critical value.

The breathing rate during the exercise is rapidly increasing in response to the reduction of the SaO2 in order to satisfy the muscular demand for O2.

This additional work for the respiratory muscles to increase the respiratory rate and the volume, partly explains why, for a similar relative intensity, the energy expenditure is higher at 2000m than at 1000m.

To benefit from these adaptations when participating at the UTAT, a runner who do not live at altitude, should, when possible, arrive a few days prior to the race day to get acclimatized to the altitude.

However, his/her VO2max in altitude will always remain lower than at sea level.

How do you manage a trail in altitude ?

To limit the negative effects of altitude on performance during a competition, it is essential that the runner pays particular attention to his/her effort management, nutrition, hydration and clothing.